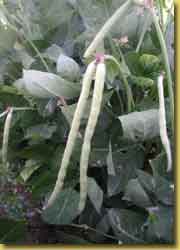 Click on the following topics to skip to a particular section:

Click here for a crop budget for cowpea (PDF)

Cowpea is one of the most ancient crops known to man. Its origin and subsequent domestication is associated with pearl millet and sorghum in Africa. It is now a broadly adapted and highly variable crop, cultivated around the world primarily for seed, but also as a vegetable (for leafy greens, green pods, fresh shelled green peas, and shelled dried peas), a cover crop and for fodder. Cowpea has a number of common names, including crowder pea, black-eyed pea and southern pea. It is known internationally as lubia, niebe, coupe or frijole. However, they are all the species Vigna unguiculata (L.) Walp., which in older references may be identified as Vigna sinensis (L.). The largest production is in Africa, with Nigeria and Niger predominating, but Brazil, Haiti, India, Myanmar, Sri Lanka, Australia, the U.S., Bosnia and Herzegovina all have significant production. Worldwide production of cowpeas is approximately 20 million acres.

In the U.S., the largest market class of cowpea harvested as dried seed is black-eyed pea and pink-eyed/purple hull southern pea. They are often cooked with water and canned or frozen. However, some cowpeas are harvested while the seed are high moisture, and sold fresh, typically referred to as southern peas. Southern peas are shelled green and the peas can be cooked fresh or frozen for later use, but there is also some consumption of the whole ‘pea pod’ as a fresh vegetable. The focus within this guide will be on production of the dried cowpea, which can be harvested with conventional grain combines.

Cowpea is considered more tolerant to drought than soybeans and better adapted to sandy soils. Many cowpea cultivars have a vining growth habit, but modern plant breeding has also led to more upright, bush-type cultivars. The vining type is preferred for forage or cover crop use, while the bush type is better suited for direct combining. There are cowpea breeding programs throughout the primary production areas, which include Arkansas, California, Texas and southeastern states. Yield information is available on the varieties released from these programs.

Total production of cowpeas for dry seed harvest in the U.S. is estimated at 60,000 to 80,000 acres. Cowpeas are grown on some farms in the southeast Missouri, where they are double cropped after wheat.

All cultivated cowpea varieties are considered warm season and adapted to heat and drought conditions. Cowpeas typically reach a canopy height of 30 to 36 inches in Missouri, although the more determinate bush types may reach only 24 inches. The seed pods are borne above the leaf axil, making the pods very visible. The seed pod is typically 3 to 6 inches long and has 6 to 13 seeds per pod. The seed weight per bushel is 60 pounds with about 3,000 to 4,000 seeds per pound.

The germination of the seed is rapid at soil temperatures above 65° F. The preferred varieties for Missouri (early types) will set pods in about 60 days and mature in 90 to 100 days with a June planting. Leaves will dry down but may not drop off completely. The relatively fast maturity of cowpeas allows their use as a double crop after wheat or canola in southern Missouri. They would probably mature too late for double cropping in northern Missouri.

Dried black-eyed peas and pink-eyed/purple hull peas are used for food products. The dried beans are frequently sold directly to the consumer after cleaning and bagging. Another common product is the canned or frozen product, which is cooked with water prior to canning or freezing. Various soups and bean mixes will incorporate this product as well. Cowpea is considered nutritious with a protein content of about 23%, fat content of 1.3%, fiber content of 1.8%, carbohydrate content of 67% and water content of 8-9%. As in most legumes, the amino acid profile complements cereal grains.

With alternative crops such as dried black-eyed or pink-eyed/purple hull peas, it is generally preferable to have a contract for growing the crop before planting. However, this market is fairly well established throughout the South and in California, so it may be possible to sell the crop successfully without having a production contract. Growers are advised to identify their markets as early as possible, rather than waiting until after harvest. It may be possible to direct market dried black-eyed or pink-eyed/purple hull peas to a food broker or retailer in Missouri.

Price for dried black-eyed or pink-eyed/purple hull peas fluctuates due to normal production and demand factors, but ranges from $0.20-0.25/lb. for the canned market, to $0.25-0.40/lb. for the dry seed market. Although this price is substantially higher than soybeans, it is offset by lower yields. Yields in the U.S. are reported at 900 to 1,350 pounds per acre, but up to 2,700 pounds per acre in California. In Missouri, yields of 1,400 to 1,800 pounds per acre should be expected with normal growing conditions and selection of an improved variety. Optimizing management on good soils would lead to higher yields. Although cowpeas benefit from good soils, their best niche, when compared to soybeans, is probably on sandy loam soils or in other moisture-limited situations. When soybean prices are low, dried black-eyed or pink-eyed/purple hull peas become more competitive — its price as a food crop is unaffected by the price of soybean, which is driven primarily by demand for livestock feed.

Production costs for cowpea are very similar to soybeans, with primary differences being post-harvest cleaning and transportation. If several Missouri farmers worked together on a common delivery point for dried black-eyed or pink-eyed/purple hull peas, transportation costs could be reduced. A double cropping practice with no additional fertilizer would keep the production costs fairly minimal for cowpea.

Overall, dried black-eyed or pink-eyed/purple hull peas can be looked at as another crop to diversify the crop base on a farm. They compare well with soybeans on sandy or drought prone soils. The fact that they are a food crop rather than a feed crop can buffer a farmer’s economic risk from variability in weather or commodity crop prices.

How to Grow Cowpea

Growing cowpea is fairly straight forward, with management practices being similar to soybeans. Proper site selection is important. Cowpea is well-adapted to sandy soils, and will perform well on rich, well drained soils, but should not be grown on wet or poorly drained soils.

The extreme variability of the species has led to a number of commercial cultivars grouped by the variance in bean shape, size and color.

• Black-eyed or pink-eyed/purple hull peas — the seeds are white with a black eye round the hilum. The "eye" can be other colors, pink, purple or shades of red being common. Upon drying, the eye color darkens to a dark purple. The pods are purple-like on the pink-eyed/purple hull type. The seeds are not tightly packed or crowded in the pod and are kidney or oblong in shape.

• Brown-eyed peas — pods range in color from green to lavender and also in length. The immature seeds, when cooked, are a medium to dark brown, very tender and have a delicate flavor.

• Crowder peas — seeds are black, speckled, and brown or brown-eyed. The seeds are "crowded" in the pod and also tend to be globular in shape.

• Cream — seeds are cream colored and not crowded in the pods. This is an intermediate between black-eyed and crowder types.

• White acre type — seeds are kidney shaped with a blunt end, semi-crowded and generally tan in color. Pods are stiff with small seeds.

• Clay types — these older varieties are medium to dark brown in color and kidney shaped, but are rarely grown.

• Forage cultivars — adapted for use as fodder, or cover crop use.

A number of varieties have been tested in mid-Missouri, with the better varieties ranging in yield from 1,400 to 1,800 pounds per acre full season, and 800 to 1,500 pounds per acre double cropped. "Coronet", a pink-eyed/purple hull type, has been the variety most commonly grown in the southeast Missouri. Choice of market class, and approach to narrow or wide rows can affect which variety to choose. Contact the Jefferson Institute (573-449-3518) for a complete list of seed sources and recommended varieties.

For optimum yield, cowpeas should be planted in early June in Missouri, although planting dates from late-May through mid-June are appropriate. A seeding rate of 50 pounds per acre is recommended and the field type seed cost is typically $0.35/pound. Plant populations in wide rows should be similar to soybeans, about 4 to 8 plants per foot of row. Field trials were done in Missouri on 30 inch row spacings, and the vine type varieties filled in the row well. The determinate, bush types may yield better on closer row spacing. The seed should be planted similar to soybeans, at 1 to 1 1/2 inches deep.

As a legume, cowpea fixes its own nitrogen, and does not need nitrogen fertilizer. In fact, some of the vigorous, vining, varieties of cowpeas are excellent nitrogen producers as a cover crop. Seed should be innoculated with the appropriate Rhizobium species for optimum nitrogen fixation, but nodules will generally form on cowpeas. Potassium and phosphorus needs have not been studied for cowpea in Missouri. Using the amounts recommended from soil tests for soybeans would be appropriate. Soil pH should be 6.0 or higher.

Weed Control
Options are less extensive than for soybeans, but several products are available. Labeled herbicides* are Authority, Dual, Poast, Pursuit, and sodium chlorate. Pursuit provides some broadleaf control, while all the products control grass weeds. However, row crop cultivation may be necessary with cowpeas, depending on the weed pressure, soil conditions, and rainfall. Preplant tillage can greatly help reduce early weed pressure, or cover crops such as rye can potentially be used for weed control.

Diseases and Insects
These have not been a problem in Missouri field trials. However, a number of diseases and pests are reported in other locations, and active breeding has taken place for resistant varieties. In southeastern production areas, the major insect pest is cowpea curculio, and the major disease is root-knot, a severe root disease induced by root-knot nematodes (Meloidogyne spp.). Cowpeas do attract an unusual number of pollinating insects when flowering.

*Pesticides mentioned as being labeled in this publication are based on reference lists published in the Thomson Publications "Quick Guide" on crop pesticides, 2002 edition. These lists are believed to be accurate, but given the changing nature of herbicide registrations, labels and relevant government regulations should be checked before applying any pesticide.

For the cowpea seed market, quality of seed is important, so care in harvest and post-harvest handling may be important to avoid cracked or split seed. Cowpea grown as a dried pea product can be direct combined using a platform head or a row crop head. Adjustments to combine settings, and possibly screen/sieve sizes, should be made for the cowpea seed. It is slightly larger than soybeans and kidney shaped. The grain can be stored short term at around 12% moisture or less, with 8 to 9% recommended for long term storage. Since the pods are relatively long, some will touch the ground or be close to it, making it important to run the grain table close to the gound. Some buyers will want the seed cleaned and bagged, while others will take the grain in bulk form and clean it themselves. For some markets, the cowpeas must be harvested at a higher moisture, such as 18%, and trucked directly from the field to the processor.